Αρχική  >  Κατηγορίες  >  Ξενόγλωσσα Λογοτεχνικά  >  Αγγλικά  >  HOW TO TRAIN YOUR DRAGON: HOW TO TWIST A DRAGON'S TALE

HOW TO TRAIN YOUR DRAGON: HOW TO TWIST A DRAGON'S TALE 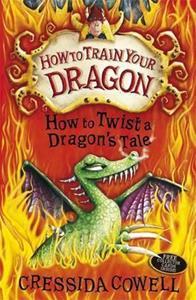 HOW TO TRAIN YOUR DRAGON: HOW TO TWIST A DRAGON'S TALE

Read the books that inspired the How to Train Your Dragon films! This book will be a hit with children and adults alike. THE STORY CONTINUES in the fifth volume of Hiccup's How to Train Your Dragon memoirs ...Hiccup Horrendous Haddock III was an awesome sword-fighter, a dragon-whisperer and the greatest Viking Hero who ever lived. But it wasn't always like that. Hiccup's memoirs look back to when Hiccup was just an ordinary boy, and finding it very hard to be a Hero. Someone has stolen the Fire Egg. Now the Volcano on Volcano Island is active and the tremors are hatching the eggs of the Exterminator dragons! Can Hiccup return the Fire Egg to the Volcano, stop the Volcano from erupting, AND save the Tribes from being wiped out by the terrible sword-claws of the Exterminators? How to Train Your Dragon is now a major DreamWorks franchise starring Gerard Butler, Cate Blanchett and Jonah Hill and the TV series, Riders of Berk, can be seen on CBeebies and Cartoon Network.Read all of Hiccup's exploits in the series: How to Train Your Dragon, How to Be a Pirate, How to Speak Dragonese, How to Cheat a Dragon's Curse, How to Twist a Dragon's Tale, A Hero's Guide to Deadly Dragons, How to Ride a Dragon's Storm, How to Break a Dragon's Heart, How to Steal a Dragon's Sword, How to Seize a Dragon's Jewel, How to Betray a Dragon's Hero and How to Fight a Dragon's Fury. Check out the brilliant website at www.howtotrainyourdragonbooks.com It's the place to go for games, downloads, activities and sneak peeks!