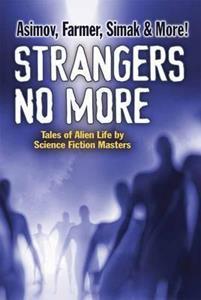 Drawn from the leading pulp magazines of the 1950s -- Galaxy, Amazing Science Fiction Stories, and Fantastic Universe -- these eight groundbreaking selections offer spellbinding science-fiction tales of encounters with Martians and other extraterrestrials. "Youth," by Isaac Asimov, recounts two friends' discovery of a pair of strange little animals the morning after mysterious thunder without a storm. Philip Jose Farmer's "Rastignac the Devil" tells of a fight against despotism 300 years in the future, and in "Year of the Big Thaw," by Marion Zimmer Bradley, a Connecticut farmer explains why he doesn't know the actual birthplace of his phenomenally gifted son. Other selections include "Warrior Race," by Robert Sheckley, which focuses on breaking an enemy's spirit; "Alien Offer," by Al Sevcik, concerning a risky chance to save Earth's children; Clifford D. Simak's "The World That Couldn't Be," in which a farmer must hunt down the unusual creatures destroying his crops; "Earthmen Bearing Gifts," by Fredric Brown, telling of an attempted exchange by the red and blue planets; and Stanley G. Weinbaum's "A Martian Odyssey," a tale that changed the course of science fiction.