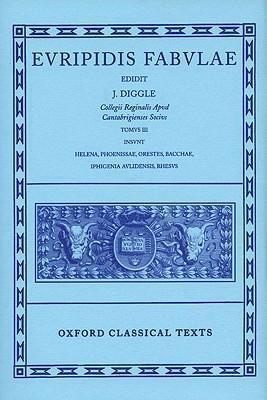 Praise for Vols. I and II: `The virtues of this first-rate edition are too numerous to catalogue, and in any case,since they will stand enshrined in what is undoubtedly to be the standard text of Euripides for the next generation or two, they will receive as their just requital the gratitude of countless scholars and students in the future.' Classical Philology 1984 `D. is to be congratulated for the high achievement represented by this volume ... We look forward to the third ... and are tempted to wish for a fourth.' Classical Philology 1986 This volume brings to completion James Diggle's major new edition of all the surviving plays of Euripides. It supersedes the third volume of Murray's Oxford Text of 1909. The work is based on new collations of all the relevant manuscripts and incorporates many new ideas for the improvement of the text suggested by recent scholars and the editor himself.