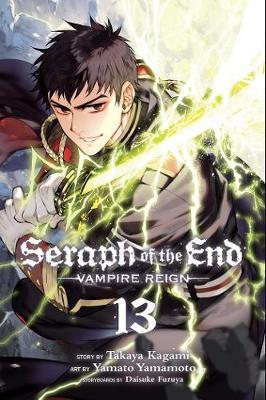 In a post-apocalyptic world of vampires vs. humans, Yuichiro brings vengeance upon his vampire overlords! After trumpets of the apocalypse proclaim the fall of humanity, vampires arise from the shadows to rule the earth. Yuichiro wants just one thing-to get revenge by killing each and every vampire. Ferid successfully coerces Shinoa Squad and Mika into joining him and Crowley on a field trip to Osaka. According to Ferid, the purpose of the trip is to see the truth behind the Calamity that ended the world-ground zero of the apocalypse. But not all is as it seems, as vampire nobles from across the world are also converging on Osaka. * The manga behind 2015's hit anime about a teenager who borrows demonic powers to reclaim the world from vampires. * Releases 3 times a year for 13+ volumes. Series is ongoing. * Serialization in Weekly Shonen Jump digital magazine alongside Boruto and One Piece. * A consistent Bookscan Top 50 and New York Times Bestseller (January 2017). * Includes lush color poster.