I AM ZLATAN IBRAHIMOVIC 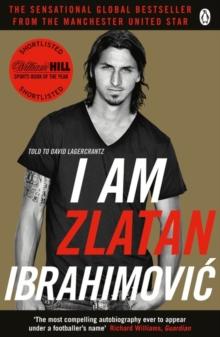 I AM ZLATAN IBRAHIMOVIC

I AM ZLATAN - the explosive, critically-acclaimed memoir of Manchester United star Zlatan Ibrahimovic, one of the world's most gifted and controversial footballers 'Why be a Fiat when you can be a Ferrari?' Welcome to planet Zlatan. This is the story of how a Swedish immigrant rose from poverty to become a football genius. In his own inimitable style, Zlatan recalls every struggle, every goal, and every training ground bust-up on his journey to dominate the world's top clubs, including Barcelona, PSG and now Manchester United. Full of wicked one-liners and amazing stories, Zlatan lifts the lid on some of the biggest names in football, including Guardiola, Messi and his new manager, Jose Mourinho. Moving, funny and totally frank, I am Zlatan is unlike any autobiography you have ever read. 'Wonderful - nothing less than a revelation. Ibrahimovic is the definitive modern sporting icon' - Matthew Syed 'The best sportsman's memoir since Andre Agassi... not just a bad boy's romp but the rise of a boy from the ghetto to the top of his profession and captain of his country. He is candid, funny and yes, wonderfully nuts' - The Times 'There's never a dull moment on Planet Zlatan. This is a snarling, fizzing, unrepentant firecracker of a book; if footballers' memoirs bore you, make an exception for this one' - Independent