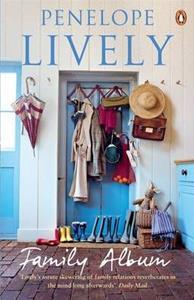 "Family Album" is the sixteenth novel from Booker Prize winner Penelope Lively. Allersmead is a big shabby Victorian suburban house. The perfect place to grow up for elegant Sandra, difficult Gina, destructive Paul, considerate Katie, clever Roger and flighty Clare. But was it? As adults, the children return to Allersmead one by one. To their home-making mother and aloof writer father, and a house that for years has played silent witness to a family's secrets. And one devastating secret of which no one speaks..."One of those ridiculously simple, ridiculously readable novels whose artistry only becomes apparent when you put it down with a sign of regret, having devoured it in one sitting...Lively still displays an economy and an elegance that put younger writers to shame". ("Sunday Telegraph"). "A pleasure to read, hugely enjoyable, consistently absorbing, hilarious". ("Independent"). Penelope Lively is the author of many prize-winning novels and short-story collections for both adults and children. She has twice been shortlisted for the Booker Prize: once in 1977 for her first novel, "The Road to Lichfield", and again in 1984 for "According to Mark". She later won the 1987 Booker Prize for her highly acclaimed novel "Moon Tiger". Her other books include "Going Back"; "Judgement Day"; "Next to Nature, Art"; "Perfect Happiness"; "Passing On"; "City of the Mind"; "Cleopatra's Sister"; "Heat Wave"; "Beyond the Blue Mountains", a collection of short stories; "Oleander, Jacaranda", a memoir of her childhood days in Egypt; "Spiderweb"; her autobiographical work, "A House Unlocked"; "The Photograph"; "Making It Up"; "Consequences"; "Family Album", which was shortlisted for the 2009 Costa Novel Award, and "How It All Began". She is a popular writer for children and has won both the Carnegie Medal and the Whitbread Award. She was appointed CBE in the 2001 New Year's Honours List, and DBE in 2012. Penelope Lively lives in London.