LAST DAYS OF THE ARCTIC 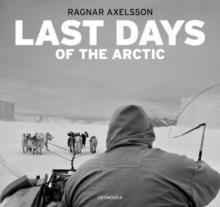 LAST DAYS OF THE ARCTIC

The Arctic is warming faster than any other region on earth. This rapid climate change has had a devastating effect on the region's ecology and, consequently, on the Inuit people who depend on the Arctic ice for their livelihood and culture. Hailed as one of the greatest documentary photographers of our times, Ragnar Axelsson has been recording the changing face of life in the Arctic for some 30 years.

This extended second edition of The Last Days of the Arctic (which was first published in 2010 and quickly became a rarity) presents 160 of his stunning photographs from Canada and Greenland, with superb duotone printing, captions added for the black-and-white photographs and new images. Axelsson's gorgeous photographs show vast glaciers, sleds gliding across ice and houses buried in snow, but they also depict how the Inuit's changing way of life foresees the changes that are on their way to the rest of the world.