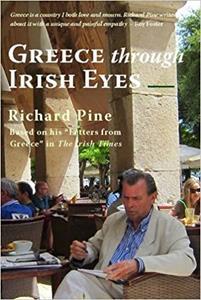 Greece through Irish Eyes is an insightful personal view by Richard Pine of the country where he has lived for the past 15 years. One of Ireland's leading literary critics, Pine asks, What links Ireland and Greece? The author's trenchant, provocative arguments acknowledge both the strengths and the weaknesses of Greece today, and draw suggestive parallels with the Irish situation. In particular, Greece through Irish Eyes examines the shared history of Ireland and Greece * in wars of independence and civil wars * in the pandemic of clientelism * in the Church/State nexus * in the power of political dynasties * in economic crises.

Pine pays special attention to the family values of honour, loyalty, and economy, arguing that these are at the heart of Greek society and culture. He develops this in a comprehensive survey of Greek law, literature and politics, and Greece's position at the centre of Balkan affairs. He graphically describes the effects of austerity on society and the economy, with up-to-the-minute accounts of the new government's attempts to renegotiate Greece's bailout.He strongly criticises the intransigence of bureaucracy, the pervasiveness of bribery and corruption and the continuing threats of terrorism and fascism.

Richard Pine also calls for a major rethink on Greek and Irish positions on Europe. The parallels between Ireland and Greece may make some readers uncomfortable, but they are substantiated by solid examples of cultural, economic and historical differences which argue against integration into a centre-dominated Europe. "Greece is a country I both love and mourn.