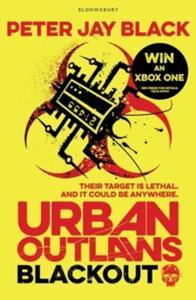 Power is out. Security is down. Computers hacked.

The world's most destructive computer virus is out of control and the pressure is on for the Urban Outlaws to destroy it. Jack knows that it's not just the world's secrets that could end up in the wrong hands. The secret location of their bunker is at the fingertips of many and the identities of the Urban Outlaws are up for grabs.

But capturing the virus feels like an almost impossible mission until they meet Hector. The Urban Outlaws know they need his help, but they have made some dangerous enemies. They could take a risk and win - or lose everything ...

More non-stop action and edge-of-your-seat adventure in the next book in the sensational new series, URBAN OUTLAWS. Fans of Robert Muchamore, Anthony Horowitz and Alex Scarrow won't be disappointed. urbanoutlawsbunker.com