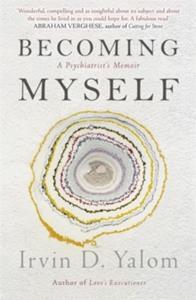 I was born in Washington, DC, June 13, 1931, of parents who immigrated from Russia shortly after the first world war. Home was the inner city of Washington - a small apartment atop my parents' grocery store on First and Seaton Street. During my childhood, Washington was a segregated city, and I lived in the midst of a poor, black neighborhood.

Life on the streets was often perilous. Indoor reading was my refuge and, twice a week, I made the hazardous bicycle trek to the central library at Seventh and K streets to stock up on supplies'. Irvin Yalom is a gifted and lyrical writer whose memoir traces his life, from the apartment above his parents' grocery store to a world stage via the intimacy of his consulting room.

The memoir includes his self-analysis and is interwoven with vignettes from patients whose stories have played such a central role in his life. For his legion of fans, and anyone interested in the human psyche, this book is not to be missed.