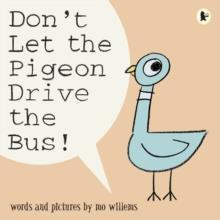 In his hilarious picture book debut, the acclaimed Mo Willems perfectly captures a toddler's temper tantrum.When a bus driver takes a break in this hilarious Caldecott Honor-winning picture book, he gives the reader just one instruction: "Don't let the pigeon drive the bus!" But, boy, that pigeon tries every trick in the book to get in that driving seat: he whines, wheedles, fibs and flatters. Will you let him drive? Told entirely in speech bubbles, this brilliantly original and funny picture book demands audience participation!