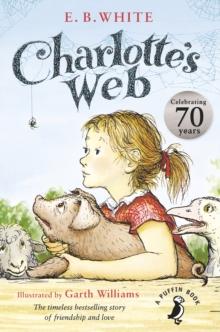 A Puffin Book - stories that last a lifetime.Puffin Modern Classics are relaunched under a new logo: A Puffin Book. There are 20 titles to collect in the series, listed below, all with exciting new covers and fun-filled endnotes.This is the story of a little girl named Fern who loved a little pig named Wilbur and of Wilbur's dear friend, Charlotte A. Cavatica, a beautiful large grey spider.

With the unlikely help of Templeton the rat, and a wonderfully clever plan of her own, Charlotte saves the life of Wilbur, who by this time has grown up to be quite a pig.A time-honoured classic favourite.E. B. White was born in New York in 1899 and died in 1985.

He kept animals on his farm in Maine and some of these creatures crept into his books, such as STUART LITTLE which was made into a blockbusting film in 2000. He received many awards including the Laura Ingalls Wilder Medal in 1970, an award given every five years to authors who have 'made a substantial and lasting contribution to literature for children'.Also by E B White and available in A PUFFIN BOOK:Charlotte's Web; Stuart Little; The Trumpet of the SwanAlso available in A Puffin Book: GOODNIGHT MISTER TOM and BACK HOME by Michelle Magorian CHARLOTTE'S WEB, STUART LITTLE and THE TRUMPET OF THE SWAN by E. B.

White THE BORROWERS by Mary NortonSTIG OF THE DUMP by Clive KingROLL OF THUNDER, HEAR MY CRY by Mildred D. TaylorA DOG SO SMALL by Philippa PearceGOBBOLINO by Ursula Moray WilliamsCARRIE'S WAR by Nina BawdenMRS FRISBY AND THE RATS OF NIMH by Richard C O'BrienA WRINKLE IN TIME by Madeleine L'EngleTHE CAY by Theodore TaylorTARKA THE OTTER by Henry WilliamsonWATERSHIP DOWN by Richard AdamsSMITH by Leon GarfieldTHE NEVERENDING STORY by Michael EndeANNIE by Thomas MeehanTHE FAMILY FROM ONE END STREET by Eve Garnett